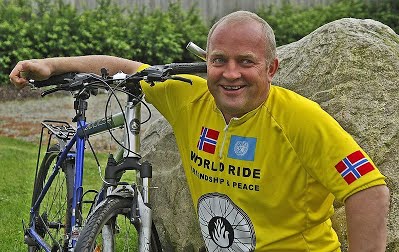 During its tours, Bike for Peace has met many well-known political, religious and cultural leaders like Pope Johannes Paul II, the former State Secretary of the Soviet Union Andreij Gromyko, the General Secretary of the United Nations Boutros Boutros Ghali and Perez de Cuellar, the former President of Poland Lech Walesa, President of Ireland Mary Robinson, the General Secretary of the National League for Democracy of Burma Aung San Suu Kyi and others. The leader of Bike for Peace Tore Naerland has been fighting for peace, disarmament and democracy on the planet for almost 30 years. He has been promoting peace by organizing biking and cultural tours in various countries since 1978 and inspired many people to join his ideas. In 2014 Mr. Naerland was nominated for the Nobel Peace Prize for his work for peace and democracy in Burma/Myanmar.